There is always more to the story! 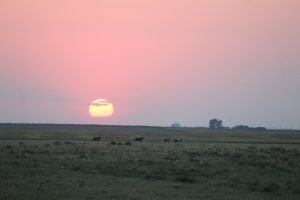 There is always more to the story.  In my book Hoofprints of the Heart, there is a story about a little girl who was bit by a rattlesnake at a one-room schoolhouse my mom attended.  After I wrote this story, my mom’s best friend from elementary read my book and called me up one day.  She said to me:  Dena, I’m going to tell you what I remember of that day, so long ago.   Please take this with a grain of salt, as my memory may fail me.  But this is what I remember:

We were at our one-room schoolhouse.  It was in the fall and we were playing Annie Annie Over.  You know, the game where you throw the ball over the building and yell “Annie Annie, Over, and the people on the other side, send it back to you.  Well, the ball went into some tall weeds and my friend ran to get it and was bit by a rattlesnake.

This was in the 1940s, so we didn’t have cell phones.  Our teacher, who was around 18 to 20 years old at the time, was very responsible and swung us all into action.  She appointed the oldest student there to take charge of the classroom and send all the kids walking back home, early that day.   And at around 12 years old,  hathe oldest boy in the 8th grade had the responsibility of walking to her house to tell her parents the devastating news.

Luckily the young teacher had a car.  She loaded her up and drove eight miles to the nearest town.  When she got there, she stopped at the telephone office and called the nearest hospital about 13 miles out.  They did not have the anti-venom that she needed, so they told her to keep driving toward the next 3 towns over, where someone would meet them on the road with the shot.

The police met her on the road and escorted her until they met another police officer halfway in between towns.  Then, right there on the highway,  the police gave her a shot that saved her life.

Whether the entire story is accurate or not, the truth is that a little girl was bit that day, and as it played out, was saved by an anti-venom shot that saved her life.  This is a story of faith in God.  For He will never leave us, nor forsake us.