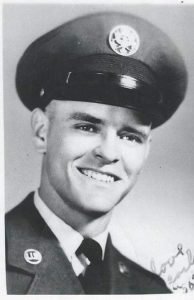 A picture of my Dad serving in the Air Force, He would be 87 years old on November 21, 2022
Edwin Earle Ekberg
November 21, 1935 -March 12, 2006
RIP Dad
A small school, sophomore class held their annual Veteran’s Day program last Wednesday. They had a guest speaker from the Wounded Warrior Project. Her speech was amazing.
The students folded the flag while the sophomore class explained what each fold represented. A local pastor lead the prayers.
The first through fifth-grade class sang America the Beautiful, and while singing, the electricity went out in the middle of the song.  This was not planned.  The entire gym went into a blackout. The piano player kept playing, the kids kept singing, and parents rushed to the stage and held their phones for a flashlight.
Afterwards, a guest Veteran stood up and gave a brief history of our National Anthem, “The Star-Spangled Banner.”
The National anthem’s history began the morning of September 14, 1814, when an attorney and amateur poet, Francis Scott Key watched U.S. soldiers- who were under war by British forces. On that morning, he woke to find that our Flag was still there, declaring an American Victory.
The symbolic moment of this day took place in a small country, rural school while singing, “America the Beautiful!’
A blackout occurred, but the piano kept playing, the kids kept singing, and the parents rushed to the stage to shine a light.
A reminder to all of us that when darkness falls, we are one Nation under God. No matter how dark it gets in our world, keep singing and shining your light.